Self Isolating due to Coronavirus?

To help people who are self isolating due to Coronavirus there is pack available with all of the numbers you may need, and useful information to help your self isolation go as easily as possible. Just click here to download and view.

For the vaccine centres at the large scale site and the hospital centres being run by Sheffield Teaching Hospitals.
Information about the role and how to apply can be found here: http://bttr.im/hy7ss
Please feel free to tag and share this post.

To view the national census leaflet answering the most common questions please click the link below:

Food bank donations will make a cracking difference over Christmas

A huge thank you to all of our Parish members who have donated to our local food bank this year. At the Pairsh Council we have been collecting donations and nipping them down to St Saviours Food Bank throughout the pandemic to help those most in need in our Community.

We will be making our final drop before Christmas this week, and it really is heartwarming to see all of the donations we have received so close to Christmas.

Special thanks to Candy Kabin and Mazehill Nursery who dropped off lots of donations they collected from their customers and parents, which will really give the Food Bank a boost.

The tradition of singing local carols has thrived in the Sheffield area, especially in pubs, for two or three centuries and most of the carols pre-date the well-known ‘conventional’ carols.

Normally we would be singing the Ecclesfield Carols in the Black Bull where we have been for the last 70 years, but this year we will be meeting via Zoom instead.

You are very welcome to join us and there is no charge for participating.

Visit localcarols.org.uk  for more information on all this year’s virtual local carol sings, including Ecclesfield, where you can fill in a short form for us to send you the Zoom links to the Ecclesfield sings and words to the carols.

Hopefully next year the local carols will be back in their rightful place in the pubs!

Ecclesfield Park consultation has now gone live and there are posters on the entrance points and other areas of the park, which can also be viewed by clicking here. The aim of the consultation is to gather public feedback & suggestions on how the community use their local greenspace and how they’d like to see it improved. This will give the Council an idea of what people would like and help them to start drafting proposals for changes.

The online consultation which will run initially until 31st January 2021.

To share your ideas & opinions on how the park can be improved to support your health and wellbeing, and that of the wider community visit: https://sheffield.citizenspace.com/place-planning-1/ecclesfieldpark

A letter from the Deputy Lord Leftenant Christopher J Jewitt  to Anthony Roebuck President of the Royal British Legion, Chapeltown Branch,  praising the branch and Ecclesfield Parish Council on the success of a very different Remembrance Day Service during the pandemic this year. 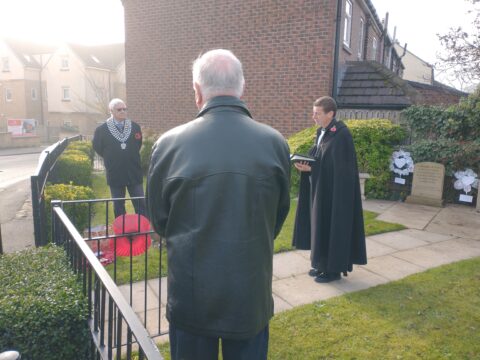 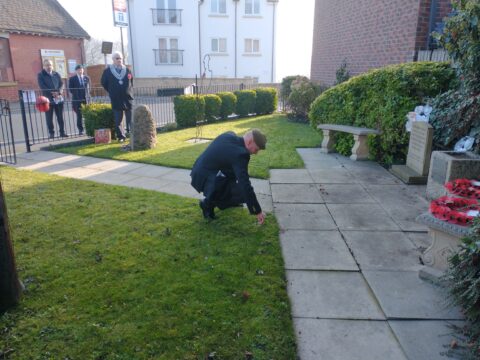 It was well organised, well attended (suitably socially distanced!) and carried out with professionalism not to mention having taken a considerable amount of effort to ensure it was Covid compliant. What I gather from comments from other DLs Chapeltown’s was certainly one of the larger ceremonies and, at the time of writing, only one of two which had a nigh on complete Service of Remembrance, the other being Sheffield.

So well done and congratulations in pulling it all together in a very short period of time. As I said in my few words, it was a very special occasion which I felt privileged to attend and I do hope that I can return next year to witness Chapeltown’s Remembrance Sunday Parade and Service returned to its more normal series of events.

In closing, I would be grateful if you would pass on my thanks to John Housley, chairman of Ecclesfield Parish Council and your Chaplin, the Reverend Rick Stordy, both of whom made me fell most welcome. If there is a chance of a photograph of the War Memorial with the wreaths in place, I would be grateful: we are building up a small library of photographs and I omitted to take one before leaving!

We are proud to announce we have launched our first Newsletter which will go on to be published quarterly. We hope this will be a way to summarise the activity which we have been doing across the Parish and also signpost Parishioners to what’s happening in our Community.

Christmas is definitely on it’s way now and although it may look a little different, our usual Parish traditions are continuing where possible, although maybe in a different way.
This year the Grenoside Community Centre will be holding their annual village carols online via zoom and it is open to all.
Click the link below for full details of how to join this festive zoom meeting …
http://www.villagecarols.org.uk/events/festival-of-village-carols-goes-virtual.html

One of our new projects this Autumn is working on becoming much more Dementia Friendly within our community. We are working closely with our local Dementia friendly champions and community workers along with Sheffield Dementia Action Alliance.

We already signpost through our website and Facebook pages to any dementia friendly groups… click here to see our events calendar, for dementia friendly events which are currently running via zoom. If you know of any others which members of our Parish would benefit from please email: emmamainwaring@ecclesfield-pc.gov.uk.

We will also be posting weekly activity packs for those with Dementia, which can be printed at home. Please click here for this week’s pack.

If you would like any further information, or advice on how to become more dementia friendly please contact emmaminwaring@ecclesfield-pc.gov.uk